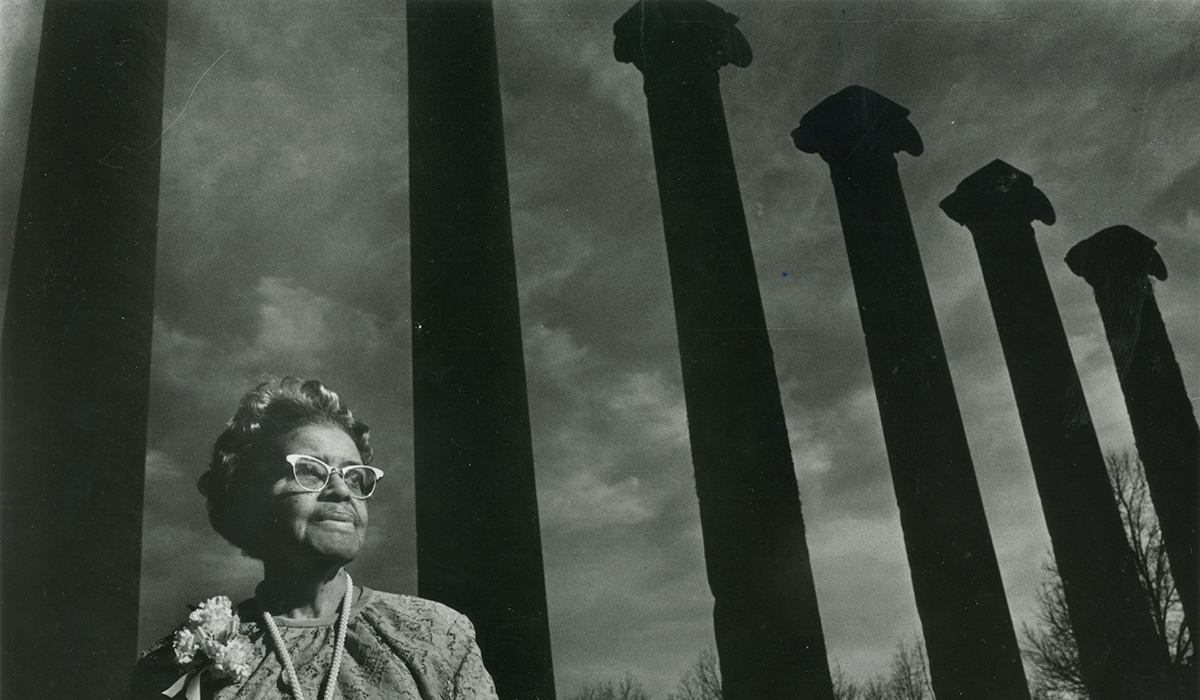 “From this day forward, Lucile Bluford Residence Hall and the Gus T. Ridgel Atrium will stand as testaments to the spirit of justice and perseverance that animated both of these individuals,” said David Steelman, chair of the Board of Curators. “Lucile Bluford and Gus Ridgel exemplified the university’s values of Respect, Responsibility, Discovery and Excellence.”

The hall’s naming was recommended by Curator Darryl Chatman and Student Representative to the Board of Curators Courtney Lauer, both of whom chaired a working group regarding the residence hall naming.

“We heard from a variety of people and groups passionate about Mizzou,” said Chatman, who is vice chair of the board. “We celebrate the outstanding accomplishments of these two individuals who’ve had a tremendous impact on our institution.”

Bluford’s nomination had widespread support from the MU community: the MU Residence Halls Association, the Intercampus Student Council, MU Faculty Council, the Mizzou Alumni Association Governing Board and MU Staff Advisory Council all passed resolutions in support of the naming.

In 1939, Bluford applied to the Missouri School of Journalism to do graduate work. Although initially accepted into the program, Bluford was turned away when she arrived in Columbia to enroll, as university officials had not known that she was African-American. She believed that education was the key to advancement and equal treatment in society. Through her eloquent writing, bold actions, courage and resilience, Bluford helped change the way African-Americans are treated, especially in the area of higher education. In 1984, she received an Honor Medal for Distinguished Service from the School of Journalism, and in 1989, she was awarded an honorary doctorate in journalism from MU.

Ridgel, who received a master’s degree from MU in economics in 1951, has led a distinguished career as a researcher, teacher and administrator.

After graduating in 1951, Ridgel taught for a year at Fort Valley State University in Fort Valley, Georgia, before going on to earn a doctorate in economics from the University of Wisconsin. He also completed postdoctoral work at the University of Chicago, Indiana University, Duke University and other schools. In 1960, he was hired as head of the Department of Business at Kentucky State University where, other than a few years in the 1980s, he served until he retired in 1996 as vice president for finance and administration.

In the 1980s, Ridgel was asked if he would be willing to have a fellowship named after him. Established in 1987, the Gus T. Ridgel Fellowship is available to underrepresented minority graduate students in any discipline. Sixty-three students currently receive the fellowship.

Ridgel, 91, described the naming as “humbling.”

“I am very appreciative of the honor bestowed on me by the university,” Ridgel said. “The University of Missouri holds a very dear place in my heart. I never could have anticipated such an honor when I enrolled at the university in 1950. I am appreciative and humbled.”

“It’s my hope that Bluford Hall and the Ridgel Atrium will remind us all of our duty to ensure that Mizzou is welcoming to all students, faculty and staff,” MU Chancellor Alexander N. Cartwright said. “I am proud of the overwhelming support our campus has shown for recognizing these two individuals.”