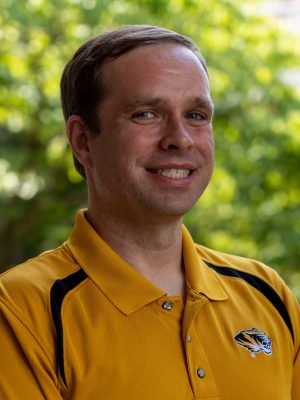 Jeremy Bloss has worked for the McNair Scholars Program at the University of Missouri since 2004, where he began under the first director of the program who wrote the original grant in 1989.

As coordinator his role includes working on recruiting potential scholars and planning and coordinating the program activities.  He also oversees the Discover Program, an early exposure to graduate school program for freshmen and sophomores.

He has served on many committees within the Missouri-Kansas-Nebraska state TRIO association and especially MKN Heartland McNair Conference and the Legislation & Education Committee which he co-chairs . He was also an MKN MILE (Members Involved in Leadership and Engagement) 2020 cohort. In his time with the McNair Scholars Program at MU, he has helped guide over 250 under-represented and first-generation undergraduates to graduate school.

Additionally, he has served on the MU Minority Affairs Committee and the MU Council for Inclusive Excellence. He’s also served as an Inclusive Excellence Liaison.  Jeremy was highly involved in the founding of McNair Association of Professionals and has continued to serve as co-chair of the Legislative Committee, serves on the Governance Committee and created an ad hoc committee for Pre-scholar/Early Entry McNair Scholars.

How long have you been at the university?
With McNair since 2004, employed at MU since 2002.

What committees, professional organizations or other groups do you serve on?
Mizzou Minority Affairs Committee
Mizzou Council for Inclusive Excellence
Mizzou Education Award Committee
Past Board Member Columbia Entertainment Company